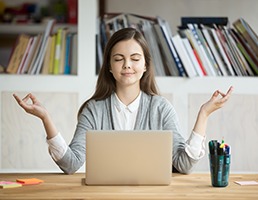 Almost half of workers (49 per cent) want a yoga and meditation room and exercise facilities (50 per cent) to help tackle workplace stress, shows a survey published this week to highlight International Stress Awareness Week (5-9 November).

The nationwide poll of employees reveals that two-thirds of workers (64 per cent) have 'poor' or 'below average' mental well-being, according to the Short Warwick-Edinburgh Mental Wellbeing Scale (SWEMWBS).

The research, conducted by the Stress Management Society and commissioned by workplace consultant Peldon Rose, displays a stress epidemic among the nation's workforce, with over a third (36 per cent) of people saying their workplace stress has been ongoing for the past five years.

As three-quarters (75 per cent) of people are in a sedentary occupation and a third (36 per cent) of people work nine hours or more a day, employees are increasingly aware of the detrimental impact that long hours and physical inactivity are having on their mental health and almost half (46 per cent) cite a lack of time to focus on well-being and exercise as a leading cause of stress in their workplace - second only to increasing workloads (56 per cent).

Employees are urging businesses to take a radical new approach to help them tackle stress; half of workers are calling for the introduction of a yoga and meditation room (49 per cent) and exercise facilities (50 per cent) in the office followed by heating and ventilation (44 per cent), quiet working areas (42 per cent) and breakout spaces (38 per cent).

 Half of all workers (48 per cent) say that they have taken a day off work for their mental health. Middle-aged workers (35-50) are particularly likely to have done this with 53 per cent saying they have compared with 43 per cent of younger workers (18-34).

 Causes of stress: 'Increasing or heavy workloads' (56 per cent), 'limited time to focus on well-being' (46 per cent) and 'poor, slow or out-of-date technology' (37 per cent) are the leading causes of workplace stress.