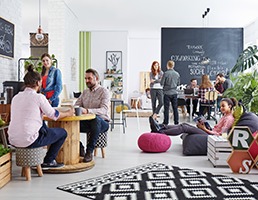 Flexible office space is likely to grow by up to 30 per cent each year over the coming five years, predicts research published by global real estate consultant JLL.

The report, Disruption or Distraction, delves into the growth of Europe's flexible office space and estimates that the sector has more than doubled in size since 2014.

JLL's research found that the amount of flexible space in the 20 largest flexible office markets grew by 30 per cent in 2017, which is the equivalent to around 1 million square metres. In 2030 it will account for 30 per cent of corporate portfolios.

It also stated that the market is split into three types of flexible space users - conservative, experimental and visionary - with the latter making "significant usage" of space compared to "low" and "low to moderate" use of the other two categories.

The last two groups will drive the use of space over the coming years, adds JLL.

Barriers to flexible space adoption include concerns around brand dilution, cost, security and confidentiality. But similar risks are associated with non-adoption, including staff retention and attraction - and businesses being perceived as stale.

Dan Brown, head of flex space, EMEA, JLL, said: "The rise of flex space is resulting in one of the biggest shifts across the real estate industry that we've ever seen. The consumerisation of real estate, which we've already witnessed in hospitality and retail, is reshaping business models and investment strategies alike.

"Our research shows how different markets and different companies are moving at varying speeds, and as the dramatic growth showing no signs of slowing, companies, investors and developers must keep on top of the evolution to understand what this means for their specific business ambitions."