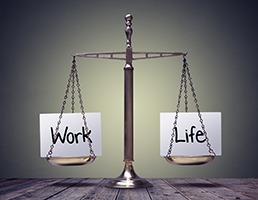 Three-quarters of UK employees (73 per cent) like to keep their work and home lives separate from one another finds research by human resources management software ADP (Automatic Data Processing).

Despite this, almost a third (30 per cent) of UK workers don't feel that they have a good work-life balance in their current role.

The study, which surveyed more than 2,000 workers across France, Germany, Italy, Netherlands and the UK, found that UK workers have a tougher time separating their personal and professional lives than European workers.

An average of one-third (33 per cent) of European workers polled feel that a bad day at work affects their personal life, compared with 38 per cent in the UK.

Worryingly, almost a third (30 per cent) of British workers believe that their work does not make a difference, suggesting that a large number of employees are having regular bad days at work.

Across Europe, women tended to find a work-life balance more appealing, with 62 per cent identifying it as a very important feature of their ideal job, but only 52 per cent of men do the same.

The younger the employee, the less likely they are to identify work-life balance as important.

Over-65s bucked the trend, with over 13 per cent not identifying work-life balance as an important feature of their ideal job.