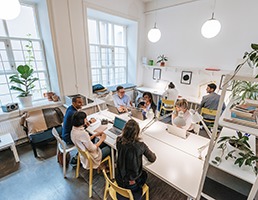 The demand for flexible workspace is set to accelerate as over two-thirds of global corporates plan to extend their use of flexible co-working and collaborative space over the next three years, according to property consultant Knight Frank.

The research shows that global companies intend to operate increasingly from flexible, serviced and co-working spaces, which create a more collaborative working environment and offer the freedom to expand and contract quickly in line with market conditions.

Despite the proliferation of co-working and serviced office operators, most global corporates occupy office space on a traditional lease model. Two-thirds of companies surveyed by Knight Frank reported that co-working, serviced and flexible office space comprise 5 per cent or less of their current office space. A small minority, less than 7 per cent, said that flexible workspace exceeds a fifth of their total workspace.

But the study reveals that the proportion of flexible space within companies' portfolios is set to increase dramatically. Over two-thirds (69 per cent) of global corporates plan to increase use of co-working spaces, and 80 per cent expect to expand the amount of collaborative space they use over the next three years.

And almost half (44 per cent) state that flexible space would constitute up to a fifth of all office space in the next three years. An additional 16 per cent estimate that as much as half of their workspace globally would be flexible space within the same time period.

Over half of companies (55 per cent) identified increased flexibility as the main driver of this change, with a significant proportion (11 per cent) stating that the sense of community fostered among workers is the key benefit. Another 11 per cent state that the greater speed to becoming operational is the primary reason for selecting co-working or serviced office space ahead of more conventional office space.

The overwhelming majority of respondents - 75 per cent - state that personal productivity linked to well-being and happiness would increase as they shift to a new flexible and collaborative model of occupancy that is more in keeping with today's business structures and working styles.

Dr Lee Elliott, global head of occupier research at Knight Frank, said: "This research underlines that a decade of global economic uncertainty has reshaped how many of the world's largest companies view workspace.

"Shorter business planning horizons, together with the emergence of new, more agile corporate structures has driven demand for flexible space which enables companies to react to change quickly.

"While co-working and serviced office operators have grown rapidly over the past five years, driven largely by start-ups and the freelance economy, this is only the tip of the iceberg with latent demand from global companies set to emerge over the next three years."