Leadership is 'most important factor to impact productivity' 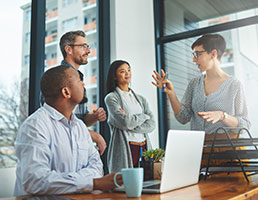 Quality of leadership is reported to be the single most important factor to affect the level of productivity in an organisation, shows an international study.

The report, The Puzzle of Productivity: What Enhances Workplace Performance? was compiled by the Fourfront Group, The United Workplace (TUW) and Worktech Academy.

It found that more than half of respondents surveyed (53 per cent) named leadership as the most important factor in raising organisational performance.

Less than a fifth of respondents named environment, technology or wellness as being the most important factor. Environment came second to leadership, but a long way behind on 18 per cent of the survey.

More than half of the organisations surveyed worldwide (54 per cent) said that 'inspiring leadership' is the best way to motivate staff to improve performance, whereas a 'well-designed workplace' scored much lower on 19 per cent, with 'a focus on wellness' (14 per cent) and 'seamless tech' (13 per cent) even further down the field.

Aki Stamatis, chairman Fourfront Group and TUW, said: "What's clear from our research and the interviews is that whilst leadership is conclusively regarded as a dominant factor in raising performance, not enough attention is paid to it by those of us working within the workplace. We need to allow leadership to forge a deeper understanding and strong partnership with workplace design because one cannot deliver what organisations need to improve their productivity without the other."

Jeremy Myerson, director, Worktech Academy, said: "Leadership may be regarded as the most important factor in improving organisational productivity, but it has to be integrated with other major drivers of productivity, such as the environment. To achieve that integration requires key decision-makers in the market to adopt more holistic and joined-up thinking in workplace strategy."