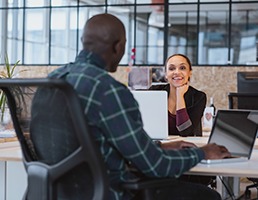 Office workers perform better in tasks related to attention span, decision-making, language skills, positivity and creativity after their static workstations are enhanced with portable sit-stand platforms, according to a study.

Research conducted by the Institute of Cognitive Neuroscience at the University College of London shows that the right to roam at work also creates a happier, more productive workforce.

The work was carried out by the Human Brain Research department at University College London, on behalf of Posturite, an ergonomics company.

It involved a group of office-based workers in London, who typically spend all day at a traditional static workstation, having access to a sit-stand platform, which is portable as well as providing options to sit and stand.

Lead researcher, professor of human brain research, Vincent Walsh, said: "Our research revealed that workers using [the sit-stand platform] were twice as competent in their decision-making skills and their language-based problem skills also improved by 64 per cent. They also completed tasks measuring concentration and vigilance 10 per cent faster and made 45 per cent fewer mistakes. Their creativity also improved by 28 per cent."

Although the physical benefits of being less sedentary have been widely recognised - such as decreasing the risk of musculoskeletal disorders, obesity and life expectancy, this is the first known piece of research that proves how the flexibility of movement at work enhances overall productivity levels and boosts brainpower and emotional well-being.

The results reveal that using portable sit-stand desks enhances productivity on a number of levels. Professor Walsh selected a group of tests that capture the psychological elements of a working day.