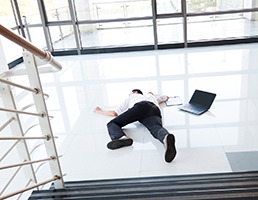 The Health and Safety Executive for Northern Ireland (HSENI) has published its annual report, which shows a decrease in the number of workplace fatalities.

But the statistics do show a significant increase in injuries, with major injuries up by 27 per cent on last year and all reportable injuries up by 13 per cent.

Derek Martin, chair of HSENI, said: "Whilst it is encouraging that workplace deaths are down by 31 per cent, it is disappointing that serious injuries in the workplace are up by 27 per cent. HSENI's new draft Corporate Plan 2018-2023 focuses, not only on the causes of fatal accidents but also on those activities and work areas where the most serious injuries and cases of ill health are known to occur. Over the coming years, these are areas which HSENI will collaborate with partners and industry sectors to drive the numbers down."

The annual report highlights the work HSENI undertakes, ranging from partnering with organisations to provide advice and raise health and safety awareness to its enforcement and inspection role.

During 2017-18 HSENI, in conjunction with local councils, raised the issue of 'slips and trips'. HSENI also carried out 6,233 inspections and served 216 formal enforcement notices where very poor practice was found.