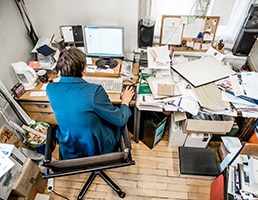 Research highlights that one in five UK workers has about two unproductive hours every week caused by poor or inadequate office and work environments.

Disruptive colleagues, lack of natural light, a lack of coffee and tea facilities and noisy offices are just a few factors contributing to the chronic productivity problem facing the UK, according to a report by Mace and its facilities management arm Mace Macro.

It also reveals that across the whole of the UK the average number of hours lost to unproductive workplaces is 2.4 hours a week and based on Office of National Statistics value of time data this translates to a cost of £4 billion in lost output every year for the UK economy.

The analysis, conducted by a former Bank of England economist, urges businesses of all sizes to urgently review their office spaces to make sure that the design and facilities benefit the mental health and well-being of their staff.

Bespoke polling by Populus commissioned as part of the study highlights the problem:

 One in five office workers across the UK claims to be unproductive for around two hours a week because of poor office environments.

 18-24 year olds are the age group most affected by poorly designed workplaces, with 25 per cent of those questioned saying they are unproductive for as many as eight hours a month.

The report contends that businesses should regularly review their workspaces and engage with their staff to understand what changes could be made to provide the optimal working conditions.

Incremental changes could have a major impact, with the research pointing to figures from a 2018 Leesman study showing that 79 per cent of employees globally rank tea, coffee and other refreshment facilities as an important workplace feature; 44 per cent of employees around the globe state that learning from others is an important work activity, and less than a third of employees around the globe are satisfied with workplace noise levels.

The paper also points to the development of 'smart buildings' as a way to boost workplace productivity and improve bottom lines. The use of sensors throughout an office could help employers to better understand how to control temperature, security and the stationing of facilities such as water coolers to respond to employee needs.

Ross Abbate, global managing director of Mace Macro, said: "Property is one of the single largest outlays for any business. However, most businesses tend not to think about the purpose of their offices until their lease is up for review.

"A well-designed workspace with the right facilities and most up-to-date technology could have a dramatic impact on the productivity levels of the company as a whole. A few minor improvements could significantly improve a business's ability to attract and retain talented staff and help boost its growth potential. But that can only be achieved if procurement focuses on the desired outcomes and not just the cheapest service."