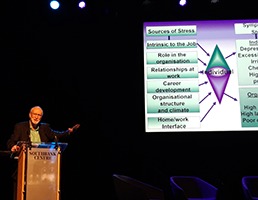 Toxic line managers are the most critical factor to the health and subsequent productivity of employees, according to an academic speaking at a workplace event this week.

Professor Sir Cary Cooper, co-founder at workplace consultancy Robertson-Cooper and author, told delegates at Worktech 2018 in London, that "all the evidence in the occupational health, well-being areas shows that the biggest problem we all have are our bosses, whoever they are".

Cooper said: "On the door of every workplace, there should be a sign saying 'your boss is potentially dangerous to your health' like we have on cigarette packets. The evidence is clear: that is the critical thing."

He said the government's Department for Work and Pensions was currently working on understanding and improving the "emotional intelligence" of line managers.

Cooper said: "Our managers are not as socially and emotionally sensitive as they need to be... who manages you is critical to your well-being."

He added that the workplace has to be designed for employees and they must be involved in its design.

"Psychological environment is much more significant," said Cooper. "You can be in a lousy work environment but if you have a great boss who manages you with a praise-and-reward approach rather than a fault-finding one, who knows you and knows you have issues at home, who gives you flexible working if you need it - it is really important."