Mitie helps Aldi and Matalan to prepare for winter weather 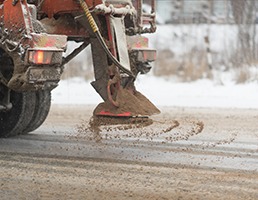 Mitie has won two large contracts with retailers Aldi and Matalan to clear and grit roads, car parks and other areas close to the stores across the UK.

Mitie has agreed on winter maintenance work at 164 sites for Aldi across South Wales and the west of England. For Matalan, 61 sites and two distribution centres across the UK will be protected from the elements.

Mitie will use the latest technology and "a specialised five-day rolling forecast based on timely data from the Met Office's powerful computer weather prediction system to gauge an early indication of conditions ahead".

The Go-Grit system that Mitie uses consists of an interactive mapping system of customer sites, tracking the weather impact on high-risk areas in a real-time format.

The app allows customers to see a schedule of what sites are due to be gritted, allowing them to cancel or order a service at a moment's notice.

Richard Hughes, general manager at Mitie Winter Maintenance, said: "Last winter's disruption, brought about by the 'Beast from the East', [means] it is a critical decision to partner with a company with the scale and expertise to keep any retail operations moving. Last year, Mitie's winter maintenance team carried out almost 300,000 gritting visits and used 15,000 tonnes of salt over the winter."