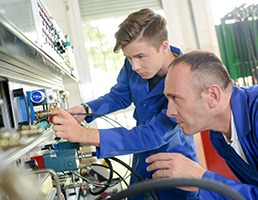 Apprenticeship starts are falling because of the Apprenticeship Levy, which needs to be made more flexible, according to the Federation of Master Builders (FMB).

The FMB's reaction is in response to statistics published today by the Department for Education, which show that there has been a 24 per cent fall in apprenticeship starts for the 2017/18 academic year compared with the previous academic year.

Brian Berry, chief executive of the FMB, said: "Apprenticeships are falling and the government must take urgent action to reverse the decline. At the recent Conservative Party Conference, the government announced much-needed reforms to the Apprenticeship Levy, but these do not go far enough. From April 2019, large firms will be allowed to pass 25 per cent of levy vouchers down through the supply chain to smaller firms but the FMB is calling for this to be increased to 100 per cent.

"This is an important change because in construction it's the smaller firms that train more than two-thirds of all apprentices. Conversely, large firms don't tend to directly employ or train trades people. If the government is serious about creating three million quality apprenticeships by 2020, it must ensure the Apprenticeship Levy works for the construction industry."