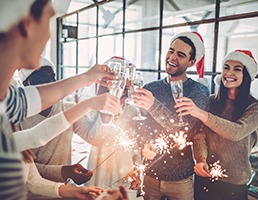 However, given the choice, three-quarters of workers (74 per cent) would rather their companies invested in their ongoing health and well-being, the survey reveals.

More than 300 UK workers were asked if their employer was willing to allocate £100 to them, would they rather it went towards the company Christmas party or their health and well-being over the coming months and 74 per cent chose well-being support (such as gym and sports memberships, yoga classes, in-office talks on mindfulness and mental health awareness, and free fruit in the office) over an all-expenses-paid Christmas party covering drinks, food, entertainment and transport.

Women emerge as the biggest advocates of well-being support - 80 per cent of those surveyed would choose it over a festive night out, versus 67 per cent of men.

There was consistency across age groups. Although the party option was most popular in the 18-24-year-old demographic, it was still chosen only by 30 per cent of respondents.

People working in education are the most likely to opt for well-being over partying, (82 per cent of those surveyed), while those working in construction preferred the Christmas party (57 per cent) to well-being support. Within marketing, 7 out of 10 respondents chose well-being - slightly higher than those in IT with six out of 10 opting for well-being.

London (Greater)
Up to £47,276 per annum plus excellent benefits
Reference
59097
END_OF_DOCUMENT_TOKEN_TO_BE_REPLACED