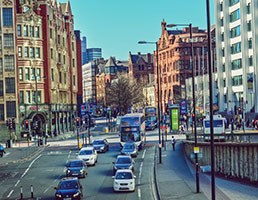 Interserve won a place on major highway and infrastructure frameworks in Manchester and across the Yorkshire and Humber Region. The framework to which Interserve was appointed had a potential value in excess of £500 million. These public sector frameworks provide opportunities to deliver projects for local authorities and other public sector bodies within the North West and Yorkshire.

Incentive FM was awarded a deal to provide a range of services at St Nicholas Shopping Centre in Sutton. The two-year agreement was the latest addition to the Montagu Evans's growing retail portfolio. St Nicholas Centre is a contemporary shopping centre in the middle of Sutton in Surrey.

The City of London Corporation had awarded an extensive high-level cleaning contract to project development and construction group Skanska. The contract, which was delivered by specialist services provider Premier Technical Services Group PLC (PTSG), consisted of a large-scale, high-level cleaning contract to a portfolio of 430 sites including iconic buildings such as the Guildhall.

Axis Security won a contract with Broadgate Estates to provide security services to a trophy building in its portfolio in the City of London, Ropemaker Place. The contract included manned guarding services, management of the post room, control room and loading bay services.

Sodexo won two new contracts worth a combined value of £4 million. The deal was with Chrysaor,  a oil and gas company in the North Sea and BW Offshore, a global provider of floating production services to the oil and gas industry.

Robertson Facilities Management signed a new three-year contract with South Tyneside College to supply ground maintenance services. The agreement, which included a one-year extension option, continued the partnership between Robertson and South Tyneside, which was initiated back in 2013.

Global real estate adviser CBRE was appointed by Phoenix Group to provide total facilities management (TFM) in a five-year contract. Under the terms of the contract, CBRE  provided FM for Phoenix's main operating base in Wythall, West Midlands, as well as other national office locations.

Graeme Davies rounded up this period of contracts with his perspective in the January 2018 issue of FM World:

A month of shockwaves

performance update. It said operating profits in 2018 are likely to be ahead of expectations and that talks with banks to shore up funding were progressing. A deadline for testing its financial covenants was pushed to 31 March with the agreement of its lenders in the hope of a solution before that date. Management says its 'Fit for Growth' efficiency programme is likely to contribute £40 million-£50 million to operating profits by 2020.

The latest company to quantify the likely effect of Carillion's demise on its business was tool and plant hire specialist Speedy Hire. It said it was committed to supporting the delivery of legacy Carillion projects but was preparing to book a £2 million exceptional hit in its accounts due to outstanding debt it was still owed by Carillion entities. In total, business with Carillion was worth £12m to Speedy in 2017.

The Labour Party joined the debate over Carillion's fall by threatening to crack down on 'rogue suppliers' among outsourcers should it take power. Labour said it would take back contracts from firms engaging in risky behaviours including sailing close to the wind financially and excessively rewarding directors. More evidence of Carillion's precarious operation emerged this week with news that it paid out £376m in dividends to investors between 2012 and 2016 despite only generating £159m in net cash from operations.

his first big strategy announcement since joining the company last year. He revealed a major restructuring of the business, halted dividend payments, and admitted that the company would be looking towards a share issue to shore up its balance sheet. The result in a febrile market for outsourcer stocks was a thumping sell-off that saw Capita shares halve in value in one day.