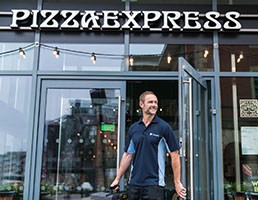 Pizza restaurant chain Pizza Express extended its contract with FM provider Cloudfm.  The tech-led FM specialist continues managing all planned and reactive maintenance for the restaurant brand at more than 490 sites across the UK. The contract renewal was worth £50 million over five years.

Spectrum cleaned up in East Kilbride

Spectrum, the contract cleaning, FM, specialist and event cleaning company, was appointed to look after Micron Technology's facilities in East Kilbride, one of its two locations in the UK. Spectrum provided a daily cleaning service for both the offices and the warehouse complex, and carried out carpet and upholstery cleaning, janitorial services, hygiene and washroom services and window cleaning.

Sodexo' food for thought at academy

Sodexo won a three-year contract with Wellspring Academy Trust to deliver catering and hospitality services to 12 schools initially in the Yorkshire and Humber region. The schools have benefitted from Sodexo's new modern school food offer, and has introduced programmes across schools and academies to encourage pupils to get involved in service development, and appreciate food and cooking.

Astrum Commercial Cleaning Services teamed up with B&M Waste Services to carry out waste collection and recycling at several sites in Birmingham. The 21 sites at which B&M will provide waste services included eight on the Birmingham Business Park as well as Astrum's head office at Diddington Farm.

Julius Rutherfoord & Co  won two three-year contracts to care for contemporary office spaces in London. The first is with 40 Bank Street at Canary Wharf, and the second with the London office of international law firm Bird & Bird. Julius Rutherfoord supplied a service to protect the fabric of Bird & Bird's building.

Mitie's security business and Signature, its bespoke front-of-house business, was  awarded two new contracts with a combined value of £7 million. The first win was a three-year deal with the prestigious Royal Academy of Arts, in Piccadilly, London. Signature has was  also awarded a contract to provide front-of-house services for a global financial institution at its head office in London.

Elior UK was awarded a catering contract with The Famous Grouse Experience (The Edrington Group) at the historic Glenturret Distillery in Crieff, Perthshire. The three-year contract saw Elior operate under The Famous Grouse brand, providing an artisanal food and drink offer with exceptional customer service at both the distillery's newly branded outlets

Graeme Davies rounded up this period of contracts with his perspective in the April 2018 issue of FM World:

A month to wax and wane

Renewi, the waste specialist created by the merger of Shanks Group and

Dutch peer Van Gansewinkel Groep, reported that trading met management expectations during the final weeks of its financial year. Only weeks before, management had detailed issues with several PFI deals which required "prudent recognition of expected losses" on three operating deals in Yorkshire and exiting a loss-making job in Dumfries & Galloway.

The official receiver dealing with Carillion's collapse has had an unenviable task. But more than 10,000 jobs had been saved by mid-April and this figure did not include 5,000 workers on contracts where a buyer has been found but the deal is not yet finalised. The latest example came from Queen Alexandra Hospital in Portsmouth, where Engie signed a deal for facilities services for up to nine months while a longerterm contract is agreed, securing 700 roles in the process.

Rentokil Initial's strategy of growing via bolt-on acquisitions is paying off.

In Q1 revenues rose by 15.7 per cent at constant exchange rates, or just under 11 per cent at actual exchange rates, to £545.9m. Acquisitions contributed 12.5 per cent growth with organic revenue growth a more modest 3.2 per cent as in Puerto Rico operations were hampered by last year's hurricane. Rentokil also acquired 11 pest control businesses and

the Cannon Hygiene business, adding over £100m in annual revenues.

Full-year results from Capita illustrated the issues that have forced the company into a number of warnings over the past year and a big review of its operations and strategy. Over the year to December reported revenues were down marginally at £4.2bn while reported losses widened to £513m as the business had to take £850.7m-worth of impairments and provisions against underperforming businesses and contracts. Net debt at the year-end was £1.1bn, down from £1.8bn.