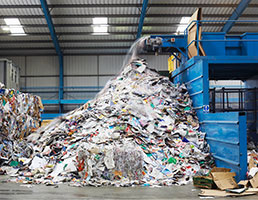 Businesses and manufacturers will pay the full cost of recycling or disposing of their packaging waste, under a major new government strategy unveiled by the environment secretary this week.

The move will overhaul England's waste system, putting a legal onus on those responsible for producing damaging waste to take greater responsibility - and to foot the bill.

The announcement forms part of the government's ambitious new Resources and Waste Strategy, the first comprehensive update in more than a decade. It will eliminate avoidable plastic waste and help to leave the environment in a better state than we found it for future generations.

Producers will also be expected to take more responsibility for items that can be harder or costly to recycle - including cars, electrical goods, and batteries.

Householders will also see the existing complicated recycling system simplified, with plans for a consistent approach to recycling across England. Timings for introduction will be subject to discussions at the Spending Review.

Launching the strategy at Veolia's recycling centre in London, one of the most advanced sorting facilities in Europe, environment secretary Michael Gove said:  "Our strategy sets out how we will go further and faster, to reduce, reuse, and recycle. Together we can move away from being a 'throwaway' society, to one that looks at waste as a valuable resource.

"We will cut our reliance on single-use plastics, end confusion over household recycling, tackle the problem of packaging by making polluters pay, and end the economic, environmental and moral scandal that is food waste.

"Through this plan we will cement our place as a world leader in resource efficiency, leaving our environment in a better state than we inherited it."

To help drive up recycling levels further, the government will introduce a consistent set of recyclable material for collection, subject to consultation. This will be funded by industry through Extended Producer Responsibility (EPR), which will see industry pay higher fees if their products are harder to reuse, repair or recycle and will encourage sustainable design, subject to consultation. EPR for packaging will rise between £0.5 billion and £1 billion a year for recycling and disposal.

The move builds on the Autumn Budget, which announced a world-leading tax on plastic packaging that does not meet a minimum threshold of at least 30 per cent recycled content, subject to consultation, from April 2022. This will address the current issue of it often being cheaper to use new, non-recycled plastic material despite its greater environmental impact.

The Resources and Waste Strategy measures.

 To ensure that producers pay the full net costs of disposal or recycling of packaging they place on the market by extending producer responsibility - up from just 10 per cent now.

 To review our producer responsibility schemes for items that can be harder or costly to recycle including cars, electrical goods, batteries and explore extending it to textiles, fishing gear, vehicle tyres, certain materials from construction and demolition, and bulky waste such as mattresses, furniture and carpets.

 To introduce a consistent set of recyclable materials collected from all households and businesses, and consistent labelling on packaging so consumers know what they can recycle to drive-up recycling rates.

 To ensure weekly collections of food waste, which is often smelly and unpleasant, for every household - restoring weekly collections in some local authorities. This will be subject to consultation, which will also consider free garden waste collections for households with gardens, to reduce greenhouse gas emissions from landfill.

 To introduce a deposit-return scheme, subject to consultation, to increase the recycling of single-use drinks containers including bottles, cans, and disposable cups filled at the point of sale.

 To explore mandatory guarantees and extended warranties on products, to encourage manufacturers to design products that last longer and drive up the levels of repair and reuse.

 To introduce annual reporting of food surplus and waste by food businesses. Should progress be insufficient, we will consult on introducing mandatory targets for food waste prevention.

 To clamp down on illegal movements of waste at home and abroad by introducing compulsory electronic tracking of waste, and tougher penalties for rogue waste crime operators if they mislabel their waste to dodge tax rules.

The strategy sits alongside government's 25 Year Environment Plan, the recently published Bioeconomy Strategy, and the Clean Growth Strategy, which sets out how the UK is leading the world in cutting carbon emissions to combat climate change and driving economic growth.

Richard Kirkman, Veolia's chief technology and innovation officer, said: "The government has listened to industry and these steps have the clear potential to dramatically change the way the sector operates to increase recycling and recovery rates.

"With consistent collections and advanced facilities like this at Southwark more recyclable materials can be collected for reprocessing into new products. As a business, we are ready to invest, to take advantage of new technology, build more infrastructure and work with brand owners and local authorities to harness resources on an industrial scale.

"It's the direction we have been hoping and waiting for, and with the public and businesses playing their part the UK can build a sustainable future."

Paul Vanston, CEO of the Industry Council for Packaging and the Environment (INCPEN) said: "Substantial credit is due to secretary of state Michael Gove, environment minister Therese Coffey and officials for the high quality and depth of their engagement work in the lead up to this Resources & Waste Strategy.

"The focus on whole-system changes is welcome including packaging reforms, consistency of councils' household collections, and ways to increase investment in recycling infrastructure."

Sir James Bevan, chief executive of the Environment Agency, said: "We support a circular economy and welcome the resource and waste strategy that will help us all deliver it. The plan embodies a solid commitment to tackling serious and organised waste crime, which drains the economy and blights communities.

"Last year, the EA closed down more than 800 illegal sites and carried out 93 successful prosecutions. The strategy is set to build on our successes, with additional resources, better innovation and improved partnerships across government and enforcement agencies."

The strategy builds on existing government work to tackle unnecessary waste including a world-leading ban on microbeads in personal care products, a 5p plastic bag charge, which has taken over 15 billion single-use plastic bags out of circulation, a £15 million pilot scheme for reducing food waste, and up to £10 million to clear the worst abandoned waste sites that blight local communities.

The government has also announced £8 million of funding for eight new research projects that will explore new and different ways of making, using and recycling plastics.

The government is investing £20 million to tackle plastics and boost recycling: £10 million more for plastics research and development, and £10 million to pioneer innovative approaches to boosting recycling and reducing litter, such as smart bins. This is in addition to the £20 million for plastics research and development through the Plastics Innovation Fund announced in March 2018. It has also introduced the Commonwealth Clean Oceans Alliance and a £66 million package of funding to boost global research.