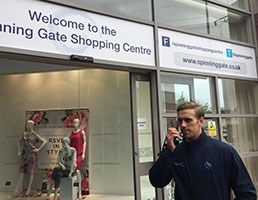 ExcluSec Security, part of The ExcluSec Group, based in Trafford Park, Manchester, was appointed to provide services at the Spinning Gate Shopping Centre in Leigh. ExcluSec Security provided the centre with 10,000 security hours annually, managing the security of four million shoppers a year.

ISS secured an extension to its contract with Heathrow to provide soft services to Terminal 2 and Terminal 4 until December 2022. ISS provided maintenance, cleaning, waste management, recycling and pest control services across both terminals since 2013. The ISS team provided a service that focuses on the passenger experience, working in partnership with Heathrow.

GVA managed a major mixed-use development in Birmingham, which includes a 27-storey office and residential tower. The company's Property Management Consultancy (PMC) team will deliver a full suite of property management, FM and destination marketing services for the Beorma Quarter project.  As part of its remit, GVA undertook the management of the buildings completed in the first phase.

Vacherin gets cooking at ITV

OCS expanded its existing £10 million-plus soft services contract with Central and North West London NHS Foundation Trust (CNWL). OCS has worked with CNWL for 12 years and the contract extension brought another 13 of the trust's sites in Milton Keynes within OCS's remit for cleaning and waste services - adding to the 82 sites where OCS already provides its full range of FM works.

Graeme Davies rounded up this period of contracts with his perspective in the August 2018 issue of FM World:

Contract wins in recent months helped to restore confidence among Interserve's investors after a year during which it did a refinancing deal with its banks. But half-year results showed a fall in revenues to just short of £1.5bn while headline profits were just £9m, down from £47m a year ago. Management said it was on track to hit £15m of annual savings in the full year towards its target of up to £50m by 2020.

Lakehouse has had an unhappy time of it as a public company, but management hopes that the sale of its construction and property services business will open a new chapter. The financials of the sale, to the newly formed Mapps Group, illustrated the keenness of Lakehouse's board to slim the business. An initial price of up to £500,000, to be determined by performance in the next six months, could be supplemented by outstanding working capital due in the next two years.

A tough UK market hit performance at FM-to-security specialist Mortice in the year to March, but its strong showing in its Indian home market meant the group turned in a decent full-year performance. Overall revenues rose by 21 per cent to $219m with security sales up 20 per cent and FM revenues 22 per cent higher. But, as management flagged a month earlier, adjusted cash earnings dipped by 9 per cent and pre-tax profits by 29 per cent due to rising costs and foreign exchange adjustments. But bosses were sanguine about prospects in both nations.

Despite having to secure refinancing, tool hire specialist HSS recorded good growth in the six months to June. Management launched a plan at the turn of the year to shore up its finances and focus on core tool hire operations. This shift was emphasised by the sale of the UK Platforms business, which should see £47.5m in proceeds come into the business. In the first six months of the year underlying revenues grew by almost 9 per cent and adjusted losses shrank from £14.2m last year to £700,000.