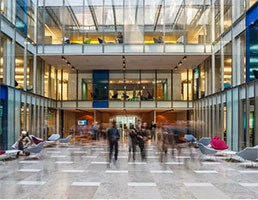 Interserve was awarded a two-year contract extension to provide total facilities management services in the London Borough of Southwark worth over £10 million. The extended contract saw Interserve continue to supply security, mechanical and electrical services, cleaning, helpdesk, and pest control services at more than 90 sites across the borough at corporate buildings, care homes, and 13 libraries.

Imtech Inviron was appointed by US-based telecommunications company CenturyLink to deliver technical services management at its portfolio of 156 sites across the UK and Ireland. Imtech's team of engineers and technicians had extensive experience with the complex nature of the mechanical and electrical data systems in these environments and will apply their understanding of 'critical environments' to the contract.

Sodexo won an eight-year, £11.2 million contract with Tyne Coast College Group to supply a combination of catering and student accommodation services on six sites in North and South Shields. Sodexo will invest in "new retail and dining facilities and has devised a bespoke food and beverage offer to suit the 12 retail, grab-and-go and refectory outlets across the sites".

Mitie renewed its landscaping contract with Whitbread Plc with a new three-year contract. Mitie delivered grounds maintenance to 440 Premier Inn sites and their associated restaurants. The landscaping team managed grass-cutting, plant bedding and weed control services as well as tree, hedge and shrub maintenance. Mitie is be investing in new technology as part of the contract.

The Royal College of Anaesthetists awarded caterer Kudos a five-year contract. The £3.3 million deal covered catering services for members and visitors. Kudos aimed to grow the venue hire and events business for the RCA.

Twickenham-based facilities management and cleaning company Stadium Support Services won a contract to become Farnborough International Airshow's principle cleaning partner until 2022. The contract saw the company deliver over 80,000 hours of cleaning services across the 770-acre site on behalf of the 1,500 exhibitors set to take part in the aviation event, which attracts up to 200,000 people each year.

Graeme Davies rounded up this period of contracts with his perspective in the July 2018 issue of FM World:

Costain reported that trading in the six months to the end of June had remained in line with management expectations with technology-led contract wins proving to be a particular source of confidence. Recent wins include a 'smart motorway' contract on the M6. At the end of the half-year the order book was maintained at £3.7bn with another £400m of work at preferred bidder stage.

Capita's attempts to revive confidence among investors has been buoyed by contract wins and another non-core disposal. Contracts include a six-year, £109m deal to provide administration services to the Department for Education and a five-year, £30m deal with Southern Water for back-office services. Capita also announced the sale of its ParkingEye business to Macquarie for £235m, taking total proceeds from non-core sales in 2018 beyond £400m.

Non-core disposals have also been on the agenda at Babcock International as it seeks to concentrate on the defence, emergency services and nuclear sectors. This strategy will not be without its risks, as illustrated by a warning in a trading update for the period since 1 April that activity levels in the UK defence business have been lower than expected due to the government restructuring its Defence and Equipment Support organisation.

Social housing and domiciliary care specialist Mears Group persuaded activist shareholders Shareholder Value Management (SVM) to back down from a demand for a shareholder meeting to vote on replacing chair and founder Bob Holt with their choice, Andrew Hogarth. But the detente was only temporary, with Mears' board committing to a full and open process to replace Holt by this autumn. SVM was advising German investors who owned almost 10 per cent of the company and alleged that under Holt management had become stale.

FM and guarding business Mortice is an oddity at the smaller end of the UK FM sector in that it has two distinct business strands on different sides of the world - the UK and India. Results for the half-year to March showed a 20 per cent uplift in overall revenues but slower growth in the UK FM business, which accounts for a third of the group's business, held back overall performance with higher costs meaning cash earnings came in flat. India accounts for almost two-thirds of group revenue.