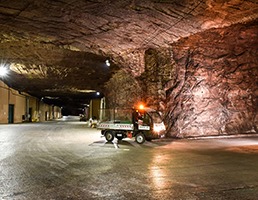 DeepStore on song for Royal College of Music

The Royal College of Music awarded a three-year contract to DeepStore to house its library's collection of music archives. The Special Collection includes composer and performer archives, and 750,000 programmes. The Royal College of Music began working with DeepStore in 2016, and embarked on a tender process for a low-risk storage and retrieval system for its Special Collection.

Specialist Window Cleaning (SWC), part of Incentive FM Group, was awarded a two-year contract extension by restaurant chain Pizza Express. SWC provides weekly window cleaning at 438 of the company's restaurants across the country. It is the third time that the contract has been extended over four years.

ISS rides on at Irish Rail

Interserve renewed its £2 million partnership with Edinburgh Zoo to deliver facilities services. The five-year deal covers cleaning, security, park presentation, and waste disposal and washroom services for the 82-acre site. The company worked with Edinburgh Zoo since 2013 and has introduced the removal of hi-vis clothing in certain areas in order not to upset the animals.

AM Services stays at Johnson Matthey

AM Services Group was awarded a contract to provide two years of security and cleaning services to Johnson Matthey in Clitheroe, Lancashire. Since the company was appointed in 2013, the contract has been subject to regular internal review. Johnson Matthey said the quality of service has given it sufficient confidence to extend the soft services deal without another tender process.

Jet Aire Services was awarded a 12-month contract to provide drainage maintenance on behalf of Yorkshire Water. Valued at £100,000, the work includes cleansing and clearance services to be provided throughout the Yorkshire region as a Tier 2 contractor, direct for Yorkshire Water. The successful tender followed Jet Aire's recent investment in five recycler units, which are more powerful than standard jetting equipment.

Emcor UK was awarded an eight-year contract to support its work with BAE Systems Typhoon Total Availability enterprise (Tytan) up to 2026. The FM provider was responsible for providing hard and soft FM services, including mechanical and electrical maintenance, cleaning, groundworks, fabric protection, CAD and project works.

Graeme Davies rounded up this period of contracts with his perspective in the October 2018 issue of FM World:

Infrastructure support services specialist Renew said it had traded in line with expectations during the year to 30 September, and should show good growth in margins and profits in its financial results due in late November. The main driver is its engineering services business, which is tracking ahead of its budgeted performance, helped by the purchase of QTS in May. The specialist building business has not kept pace due to a more selective attitude to contracts, which has seen this division shrink to the point where it represents 5 per cent of group profits.

A third-quarter trading update from Rentokil Initial suggested that the business remains well on track for a solid full year performance. Organic revenue growth was 4.4 per cent and the host of acquisitions made during the period helped bump up overall group growth up by 11.8 per cent at constant exchange rates to £637.4m, on an ongoing basis. The company continues to bolt on businesses to its Pest Control operations. Up to the end of September, Rentokil had acquired 39 businesses in emerging and growing markets, adding £156 million in annualised revenues.

The government's desire to see smart meters installed in all domestic and small business premises by 2020 has helped Smart Metering Systems establish itself as a £600m-plus business. But recent hiccups have dealt a blow to its share price as doubts have been cast on whether the government's target can be met - so two contract wins in consecutive weeks were a relief to investors. It won a mandate with Shell-owned First Utility, giving it access to a potential 1 million meter points across its customer base, then followed that up with Bristol Energy, which has 100,000 meters.

Chancellor Philip Hammond used his Budget statement to drive the final nail into the coffin of the Private Finance Initiative, declaring that he would never sign off a PFI deal. This opened up a debate about what would replace PFI as a vehicle to deliver the government's infrastructure plans. Investors reacted calmly, although the brittle sentiment towards companies with significant PFI exposure - evident since before Carillion's collapse - was not eased and share prices in those companies with the biggest exposure in this area have remained under pressure.