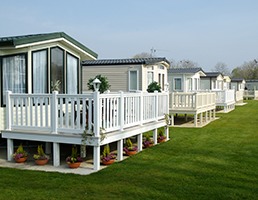 Interserve secured a £7.75 million contract for the extension and partial refurbishment of South Cliff Holiday Park in Bridlington. The scheme saw the redevelopment of the caravan and campsite and will provide new amenity buildings such as toilet blocks, a new reception building and office accommodation as well as creating new pitches for tenting, touring, glamping, static caravans and lodges.

Mercury Security Management expanded its portfolio of retail clients after being awarded a security contract at Market Cross Shopping Centre in Kilkenny in the Irish Republic. The deal saw Mercury supply a core team of expertly equipped and fully trained security officers, with ready access to additional support and resources to provide manned guarding services at the location.

Searcys dished up at the Design Museum

Searcys was appointed as the caterer to the Design Museum at Kensington in London. Searcys launched a coffee bar on the ground floor, a café on the top floor, and catering for events at the museum. The coffee bar offers Searcys' sustainably sourced coffees and teas, while the café on the second floor provides casual dining with a seasonal menu serving British classics.

CBRE secured a three-year contract with Royal Museums Greenwich (RMG) to provide mechanical and electrical services across its attractions and properties. The contract saw CBRE supporting RMG as it comes to the end of its New Galleries Project, a £12.6 million redevelopment of the National Maritime Museum, which commemorates the 250th anniversary of Captain James Cook's epic Endeavour voyage.

The Football Association's National Football Centre, St George's Park, awarded workplace caterer Olive Catering Services a contract. Olive managed the staff restaurant at the sports education and coaching facility in Staffordshire. It catered for about 220 members of staff, as well as managing pitch-side catering for events such as the under-17 UEFA European championship.

Aerospace company Airbus awarded a contract to Elior UK to manage food and drink delivery across its estate for five years. The contract saw Elior catering for 14,000 staff and guests at 20 outlets across five sites: Broughton, Filton, Newport, Portsmouth, and Stevenage. The caterer will also cater for VIP events and corporate hospitality and manage the estate's merchandising outlets - Let's Shop.

SPIE UK awarded a contract for the mechanical, electrical, public health and fire engineering services for the redevelopment of the Regent's Crescent in London. The works are valued at over £20 million and will be completed over an 86-week period, which began in June. The redevelopment by Great Marlborough Estates consisted of 63 luxury apartments and nine mews properties.

Graeme Davies rounded up this period of contracts with his perspective in the September 2018 issue of FM World:

Waste and recycling specialist Renewi continued to reshape its portfolio of businesses with the exit from the UK organic waste sector after selling its 50 per cent share of the Energen anaerobic digestion facility in Cumbernauld. Following the sale of a similar anaerobic digestion facility at Wincott Park earlier in the year, Renewi is now able to focus its municipal division on waste management deals with local authorities.

Local government cuts have made the UK municipal waste sector a tough market for Biffa in recent times, putting margins in this division under pressure. But it has a well-diversified business, which means good trading conditions in the industrial and commercial division and in resource and recovery mitigated this weakness. Biffa has spent £20m on four acquisitions in the industrial and commercial business this year, adding about £22m in annualised revenues.

The latest trading update from Babcock said the business continues to operate in line with expectations, with 87 per cent of revenues for the 2018/19 year already in place and 57 per cent of the following year's expected revenues also already booked. Management also reported a combined order book and pipeline worth £32 billion. Babcock is refocusing on its core sectors of marine, land, aviation and nuclear, exiting its North American mining and construction support businesses and selling its media services business over the summer.

Serco surprised investors with a positive unscheduled trading update, stating that stronger than expected trading coupled with better than expected savings and efficiencies were likely to produce results 'meaningfully ahead' of current expectations. This was translated by management into forecast trading profits for the full year of £90 million-£95 million, equivalent to a 30-40 per cent uplift on last year. Net debt is expected to be at the lower end of expectations, at £200m, by the end of the year.