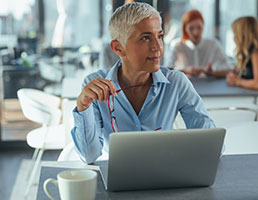 Two important barriers to work for those in their 50s and early-to-mid-60s is health and caring issues, reveals research from the Office for National Statistics.

Although people in their 50s and early 60s have a good level of general health, the prevalence of health problems increases over this age range and affects the likelihood of being in paid work.

Statisticians crunched government data and found that people with learning difficulties or certain mental health issues are less likely to work than those with depression or physical health problems.

Latest health life expectancy (HLE) figures show that for both men and women, HLE in the most deprived areas of the UK and for the most disadvantaged social groups is well below state pension age.

The government's industrial strategy includes the mission to increase healthy independent life expectancy by five years by 2035, while narrowing the gap between the experience of the richest and poorest.

Women in particular are trying to "fit it all in". The analysis has shown that a higher percentage of women aged 52 to 64 years provide care than men while at the same time the percentage of women in their 50s and 60s who work has been rising over recent decades and is now higher than ever before.

Care-giving for women aged 45 to 64 years can be associated with increased social activity (this includes caring for dependent children).

However, for the most part, informal care giving can be a mentally and physically demanding responsibility, which can negatively affect a person's overall health and, in turn, their ability to work.

Research has shown that those who combine work and care often do so at personal cost such as tiredness, ill health and lack of leisure.

Another recent study shows that few employees want to give up work to take on caring responsibilities.

However, decisions about working were based on a combination of factors, including financial considerations, health, job satisfaction and stress, as well as caring responsibilities.

Flexible working hours and part-time options are most likely to encourage people in their fifties to continue working for longer.

For more information, go to this link.