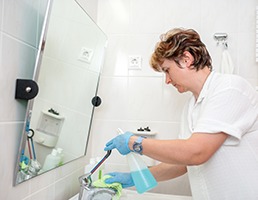 The decision by the CMA comes after an in-depth phase 2 investigation into the completed merger between two of the UK's largest suppliers of washroom services.

The firms supply commercial, industrial and public buildings with items and services such as soap dispensers, air sanitisers and sanitary waste disposal.

The CMA's group of independent panel members probing the merger published its final decision this month.

It found that the deal is likely to result in higher prices or a worse service for customers seeking a single supplier of waste disposal services at multiple locations across the whole or a large part of the UK.

The findings show that the merger of Rentokil and Cannon, two of the three major suppliers of washroom waste disposal, would reduce the choice of suppliers available to these customers.

The CMA found that this effect would not be offset by competition from other suppliers. Nor did it find evidence that future entrants into the market would have sufficient impact in the foreseeable future.

To offset the loss of competition resulting from the merger, the CMA has decided that Rentokil/Cannon must sell all contracts with customers that have premises nationally and across multiple regions, who were serviced by Cannon before the merger.

These contracts will be sold to a different company to recreate the pre-existing competitive intensity for future national contracts.

This company would need to be approved by the CMA. The new washroom services supplier will also, should it so require, be able to acquire Cannon infrastructure such as vehicles and equipment to enable it to provide an effective service to these customers.

"Where the CMA concludes that a merger will have a significant impact on competition, it will take action to restore that competition, regardless of whether a merger has been completed."