The best things to beat the office blues 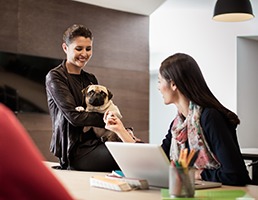 A third of UK office workers say that availability of healthy snacks and drinks would increase their happiness in the workplace - and would also boost productivity.

A survey by games room specialist Liberty Games also found that in a region of dog lovers, 39 per cent of Norwich respondents stated that an office dog would be a top choice for decreasing stress at work

The average employee will spend over 92,000 hours at work during their lifetime, so having a great working environment is important.

Not only are happy employees more likely to avoid the negative effects of stress and anxiety, they are also more productive.

In a recent study by the University of Warwick's Centre for Competitive Advantage found that happy staff increased their productivity by as much as 20 per cent.

Various factors such as well-designed office spaces, flexi-working hours and having daily stand-up meetings are all ways to improve office productivity that have been well tried and tested over the years.

A recent survey by the Society for Human Resource Management, which represents 300,000 HR professionals in more than 165 countries, found that 57 per cent of its members offer flexible working hours.

Liberty Games VP, Lisa Horn, said: "Managers who give it a try often find that employees' morale, engagement and productivity all go up because they are working at a time that works best for them, and able to get the most work done."

The top 10 factors or items that office workers said would increase their happiness and decrease their stress in 2019 were:

The top office items prioritised by men were office games (30 per cent), which includes pool tables, arcade/retro games, and football tables. Healthy snacks and drinks (37 per cent) were most prioritised by women.

The survey was carried out to coincide with National Sickie this Monday - so-called because it is statistically the day workers are more likely to call in sick.