'Social value should be primary consideration in contracts' 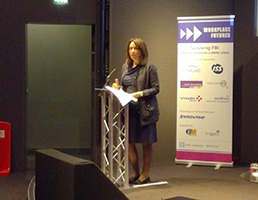 Social value should be the first consideration of those awarding contracts rather than pricing, Baroness Ruby McGregor-Smith CBE told delegates at the Workplace Futures conference in London.

McGregor-Smith, a former CEO of the Mitie Group, was giving an overview of future trends in the sector in her presentation and said the consideration of social goals was only going to rise.

She said: "In the UK there are interesting things happening we have the Social Value Act that started in 2012, which I am a real fan of. It is about the economic, social and financial well-being of an area before you even think of doing anything else there.

She added that this approach would tackle other problems in the sector too.

"There needs to be a much more balanced way of awarding contracts than public and private sector," she said. "I think the industry should be honest about this 'race to the bottom' pricing and actually say, 'this is not the right way to run contracts, it's not fair on what we try to deliver."

She said: "Being a responsible business has been around a long time, actually responsibility ethics has to be high up on the agenda too."

She added that FM by its very nature would always be fragmented but was growing positively globally and there was a growing focus on wellness issues. As the role of the facilities manager changed, she said, the training would also need to be developed because "they need to have more support, especially when managing large workforces wherever they may be".

She also pointed out that the positive work of the sector needed to be talked about rather than the "spectacular failures in the sector".

Coleen Andrews, director of markets & suppliers at the Cabinet Office, speaking in the session afterwards, told attendees that "historically the Social Value Act has been used widely in the public sector but not so much in central government, but now we're changing that and saying central government departments will have to take the Social Value Act into account as well".

The conference continues this afternoon.