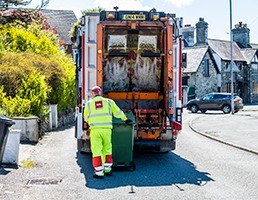 Mitie signs up to the Clean Van Commitment

Mitie has been awarded a contract for food wholesaler Bidfood as part of a new five-year deal covering all aspects of waste management.

A key element to the waste reduction strategy will see Mitie implement a circular economy, making sure that excess food is used by charities and other organisations, rather than being thrown away.

As part of the contract, Mitie will trial new waste management technology and innovation that will enable Bidfood to reduce its overall waste output and improve recycling rates.

These trials will include food waste dryers, which remove water from food to produce a dried material used to fertilise soil; bin sensors that monitor fill levels to improve the efficiency of collections and reverse vending machines that accept used cans and bottles so that they can be sorted and recycled.

The company's Manchester depot will act as the innovation hub and initiatives that prove successful will then be rolled out across other Bidfood premises.

Mitie has also already started to support Bidfood in its 'Choose to Reuse' school campaign, which raises awareness on how best to reduce, reuse and recycle plastic. Mitie's waste experts joined Bidfood teams touring schools across the country, teaching pupils about the impact plastic packaging is having on the planet.