Appreciation is more important than salary to employees' happiness 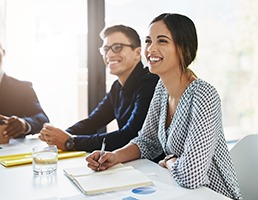 British workers would prefer more appreciation from their bosses than a salary rise, according to research from workplace consultant Peldon Rose.

The survey of more than 1,800 office workers was undertaken online in February 2019 with respondents from across a variety of industries.

It states that 80 per cent of the nation's employees consider being appreciated is more important to their happiness at work - ahead of salary (58 per cent) and feeling trusted (55 per cent).

But the survey also reveals that there is work to be done to boost workplace happiness, as fewer than half (45 per cent) of employees say they actually feel appreciated and only two-thirds (67 per cent) say they are happy at work.

Construction and manufacturing rate as the happiest sectors to work in, with nearly 8 in 10 (78 per cent) employees saying they are happy at work, followed by media and communications (72 per cent), and hospitality and leisure (72 per cent).

Retail languishes at the bottom of the happiness league table - only 54 per cent of retail workers report that they are happy at work, below IT and telecoms (66 per cent) and education (67 per cent) sectors.

Investing in tech, encouraging friendships at work, boosting company culture and doing more to find out what makes workers happy were some of the suggestions put forward by researchers to boost the happiness of employees.

Jitesh Patel, chief executive at Peldon Rose, said: "Happiness is not only crucial to the mental well-being of employees, but it is also good for business. Happy workers will be more productive and creative and more likely to be loyal to their employers. To improve happiness levels, it is vital that employers demonstrate their appreciation to their employees by investing in training and development, tools and technology and the right office environment."