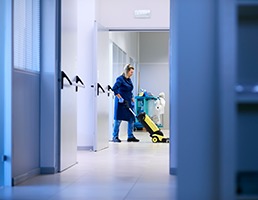 Almost two-thirds of employees are concerned that cleaners should be paid fairly.

According to research commissioned by London-based contract cleaning firm Cleanology, 63 per cent of staff care greatly about the rate of pay for cleaning operatives.

But only 39 per cent have an accurate idea of the real figures on cleaning pay.

The study was conducted in January 2019 among 1,056 respondents. Fifty per cent of respondents were male and 50 per cent were female.

Dominic Ponniah, CEO at Cleanology, said: "This data should give every FM firm and office site manager food for thought. It shows that employees across all age brackets support the concept of fair pay for cleaners, with nine in 10 saying they would lose respect for a company that did not pay the Real Living Wage.

"While work clearly needs to be done to clarify the differences between statutory rates of pay and the voluntary Real Living Wage rates, which represent the realistic minimum needed to live, for FMs and other businesses contracting cleaners, the benefits of paying a realistic rate are obvious. It not only sends the right message to employees but also positions the company as a modern, forward-thinking organisation with a strong sense of stewardship towards everyone that works within its buildings."

The research, which was conducted by Sapio Research, showed that 93 per cent of company employees cared to some extent about the level of pay afforded to cleaning operatives, while 45 per cent would not work for a company that does not pay the Real Living Wage.

The three rates of pay currently in place are:

 The National Living Wage. This is the minimum agreed by the government for over-25s. It is set at £7.83 and reflects 55 per cent of medium earnings.

 The Real Living Wage is a voluntary rate agreed by employers. Set at £9 across the UK, and at £10.55 in London, it is calculated on the cost of living, based on a basket of household goods and services.