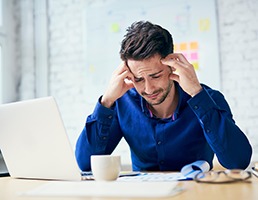 Millions of people in employment experience an "unhealthy amount of stress and anxiety", according to research company Eos Scientific.

The chemical testing and analysis company surveyed a sample of more than 2,000 adults to find out how work-life balances in the UK are affecting their health.

It found that 21 per cent of British people currently in employment, representing 6,578,126, said they worked longer than a 50-hour week.

The ONS estimates that the average work week is just under 40 hours; the law states that employees must not exceed a 48-hour work week.

According to Eos's research, 21 per cent of Britain's working population - increasing to 35 per cent for those living in London - exceed the legal limit for hours worked. It also found that 30 per cent of all Brits, representing 9,594,184 of those in employment, said that the number of hours a week they work significantly affects their mental and physical health.

For those aged 18 to 34, this statistic increases to almost two-fifths, giving credence to the recently published reports into 'millennial burnout'. As that generation is seemingly most affected by the sharp increase in diagnoses of anxiety and depression, the effect of their work-life balances cannot be ignored.

It also found that 36 per cent of Brits - at least 11 million of the working population - feel that they have had symptoms of anxiety and depression throughout their professional career, rising to just under half of those aged 18 to 34. Often at the beginnings of their careers, the youngest of those in employment are most affected by poor work-life balances and increased competition in the job market.

What is more, 29 per cent of British people in employment, or 9,230,177 of the population, think that their work-life balance is negatively affecting their physical and mental health.

Almost a third of Brits, or 15,262,293 of the adult population, believe that their mental health is in worse shape than it was five years ago.

Again, this deterioration is most prominent in those respondents aged 18 to 34 - 42 per cent of whom claim that their mental health has been negatively affected over the past five years.

The research was published to coincide with Stress Awareness Month in April.