One million Brits do not take lunch break 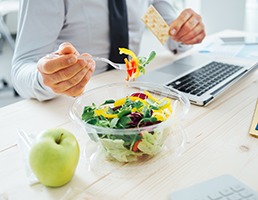 Nearly a million British workers never take a lunch break, with a further 1.6 million having just 10 minutes off during the day - despite all employees having the right to one uninterrupted break of 20 minutes if they work for over six hours day, according to research by online directory Yell.com.

The study also revealed that the average lunch break for full-time workers in the UK is just 32 minutes, and only 17 per cent of people take between 51 minutes and an hour for lunch.

One in three people (34 per cent) eats lunch at their desks and 30 per cent of people stay at their work's canteen or kitchen.

Shockingly, 325,000 employees - equivalent to the population of Wigan - claim to eat their lunch in the toilet at work.

When it comes to recharging for the working day 19 million workers (59 per cent) aren't getting enough sleep -recommended at 7-9 hours for those aged 18 to 65 - with 6.01 hours being the average. Forty-five per cent of people sleep for just five to six hours a night, 9 per cent of workers have three to four hours' sleep, and 2 per cent get less than an hour a night.

London (Greater)
Up to £47,276 per annum plus excellent benefits
Reference
59097
END_OF_DOCUMENT_TOKEN_TO_BE_REPLACED