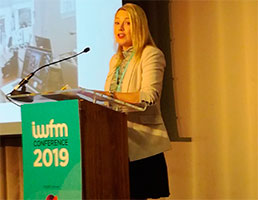 IWFM Conference live poll: ‘Customer-centric’ approach is the goal for most FMs

A key reason the UK has a productivity problem is due to the lack of effective adoption of technology, delegates at the Institute of Workplace and Facilities Management's inaugural conference heard this morning.

Heather Carey, deputy director at the Work Foundation, a not-for-profit independent consultancy on the future of work, told attendees that the UK had "a productivity problem" and has had it "for a really long time".

She said it was a well-covered issue in the media "because of the way in which productivity hasn't rebounded following the financial crisis and recession".

Carey said: "Productivity always takes a dip during economic crises. The difference here is that we were lagging behind our international competitors before [the crises] and we haven't bounced back like they have.

"That gap between us and our international competitors is significant and is widening.

"Productivity rates in the US are 28 per cent higher and in Germany they are 38 per cent higher. What that means is that it takes a German worker four days to produce the same amount of GDP that it would take a British worker to produce in five days."

One of the key reasons for this low productivity was poor adoption of technology, explained Carey.

She said: "[In the UK] we talk a lot about technology, but generally we are not seeing widespread adoption of it. We have technological leaders that are at the forefront of technological innovation. But the hard truth is innovation diffusion in the UK is not great. We have people that lag behind and we have more laggards in our economy than other country. That is a factor in why we have a productivity problem."

She told delegates that the UK also lags behind in "purchasing software, enterprise resource planning, software for people management and for managing client relationships" adding: "Things we might think we are good at -but are nowhere near the people leading on this."

Although there are more people in work "than ever before" Carey pointed out "we also have high levels of in-work poverty, which means even if you have a job, it is not a guaranteed route out of poverty".

She said according to figures analysed by the Work Foundation the business services sector (which FM falls under) had the most number of skills shortages.

London (Greater)
Up to £47,276 per annum plus excellent benefits
Reference
59097
END_OF_DOCUMENT_TOKEN_TO_BE_REPLACED