IWFM Conference live poll: 'Customer-centric' approach is the goal for most FMs 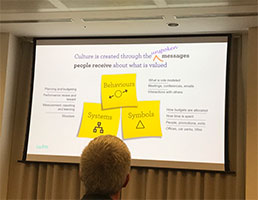 More than 30 per cent of facilities managers attending the Institute of Workplace and Facilities Managers conference this week believe that being 'customer-centric' is the priority culture goal for the organisation they serve.

A live poll carried out by one of the speakers, Carolyn Taylor, founder and executive chair of culture change organisation Walking the Talk, showed that 33 per cent of the event's several hundred attendees believe this 'archetype' to be the most important. This was followed by 21 per cent choosing 'achievement' as the most vital while 19 per cent picked 'innovation' as important.

Prioritising the 'greater good' was important to just 14 per cent of voters and a 'one-team' approach was chosen by only 8 per cent.

Taylor, an established voice in the field of culture change, said the facilities management profession was "one of nine levers for changing culture" in a workplace.

Even though human resources departments are commonly linked with the concept of culture change, Taylor pointed out that finance departments are more likely to have a bigger impact because they are able to actually invest in any endeavours.

She added that culture was "created through unspoken messages people receive about what is valued". In terms of behaviour this means what is role-modelled, what interactions with others look like, and how meetings and conferences are carried out. In terms of systems this included how the company plans or budgets, the system of performance review and reward, and its measurement reporting and structure and symbols such as how the budget is allocated, how time is spent, how people are managed and promoted and how the office looks or is arranged.

Some of the ways FMs can influence culture is by analysing how the building can change how people behave. As an example, Taylor outlined out how Google's headquarters in California started serving a comprehensive breakfast to workers and this led to employees coming in earlier and spending extra hours in the office.

She said culture change in general was not an easy objective to achieve, but FMs could influence it by role-modelling behaviours, considering how they could act as conscience and coach to influence behaviour, and aligning systems in the workplace with the values the company wants to embed into the culture.

She said: "The culture is already in the organisation. The question is: are you going to manage it actively?"