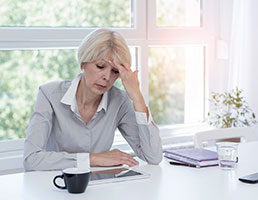 A lack of awareness of mental health conditions among older people is leading "a significant proportion" of baby-boomers to neglect their well-being, according to research from healthcare group Bupa UK.

In an intergenerational study by Bupa UK, baby boomers (aged 55-plus) were shown to be the most likely age group to delay or avoid seeking medical help for symptoms associated with mental ill-health.

This is despite the fact that two-thirds of this age group suffer from symptoms associated with mental ill health including anxiousness, continuous low mood, feelings of hopelessness and insomnia.

Many keep problems entirely bottled up: one in four (27 per cent) tell no one about these symptoms, with fewer baby boomers confiding in a partner or friend than younger generations and fewer than half consulting a doctor.

This lack of action stems from a lack of awareness that the symptoms could indicate a mental health problem, says the study. One in five (22 per cent) think their symptoms 'don't indicate anything serious' and others say mental health simply 'doesn't affect me'.

Despite mental health awareness improving in general, only one in three baby boomers feels that their knowledge has increased in the last year. This is because of a lack of targeted materials: three in 10 agree that mental health information is more aimed at younger people.

Fewer than one in three over-55s feel confident in recognising the symptoms of conditions like depression and anxiety, compared with nearly half of those aged 18 to 34 and even those who do seek help delay by more than 50 days on average.

But as early diagnosis is proved to significantly ameliorate outcomes by aiding recovery or just improving how a condition is managed, Bupa mental health experts are urging people to come forward and seek help earlier.

Pablo Vandenabeele, clinical director for Mental Health at Bupa UK, said: "It's clear to see that awareness of mental health issues is improving, but more needs to be done to address information gaps to ensure that everyone feels confident in recognising and seeking help for a mental health concern.

"Mental health issues can affect us at any age and it is important to seek support without delay, as early diagnosis and treatment can improve recovery rates. If you or a loved one are struggling with their mental health, it's important to seek medical help. Bupa's Mental Health Direct Access offers fast access to a specialist without the need for a GP referral."