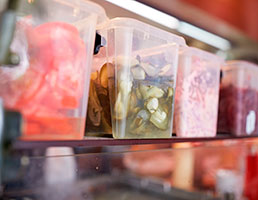 Fines for food safety and hygiene offences and prosecutions of directors and senior managers have increased following the introduction of new sentencing guidelines in England and Wales.

Findings in an impact assessment published by the Sentencing Council during April 2019 showed that the number of organisations sentenced for food safety and hygiene offences has more than doubled from around 60 in 2013, to 130 in 2016, but has since remained stable.

The Health and Safety Offences, Corporate Manslaughter and Food Safety and Hygiene Offences guideline for England and Wales came into force in 2016. It aims to ensure that imposed fines are proportionate to the circumstances and seriousness of the offence, including accountability and harm.

NFU Mutual, which specialises in insuring businesses in the food and drink sector, is warning businesses owners across the UK of the dangers of poor food hygiene and safety practices, following the publication.

Darren Seward, food and drink sector specialist at NFU Mutual, said: "To see an increase in penalties is positive for the food and drink industry as a whole. The vast majority of businesses work incredibly hard to meet their hygiene and safety obligation, and the irresponsible businesses which demean that are being held more accountable for poor conduct."

Analysis by NFU Mutual showed that there are currently more than 10,000 organisations where food is supplied, sold or consumed across England, Wales and Northern Ireland with a food hygiene rating by the Food Standards Agency of 1 'major improvement necessary' or 0 'urgent improvement is required' (ratings range from 0- 5, with 5 'very good' being the highest score).

This amounts to just over 2 per cent of total food hygiene-rated organisations.