Remote working on the rise, shows research by Monster 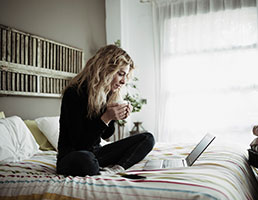 Working from home is on the rise in the UK, with around 40 per cent of employees working remotely at least once a week, research by jobs site Monster has found.

Its survey of 5,500 employees found that one in 10 works from home full-time and 26 per cent of British workers say they would not accept a job offer if it did not allow them the option of remote working.

Respondents were asked to list what they felt the most important benefits of working from home were. Nine per cent say they save money from the daily commute, and a further 30 per cent state that it saves them time having to commute into work each day.

Another 22 per cent say it gives them a better work-life balance, 14 per cent feel more productive and 11 per cent say that it reduces stress.

Despite the benefits, almost half (47 per cent) of employees claim their workplace does not have an official policy on working from home.

A third (33 per cent) admit that they like to work from home but only part-time, 15 per cent are concerned about colleagues judging them for being out of the office, and 11 per cent worry that they are less likely to be considered for promotions.

Louise Goodman, marketing director at Monster, said: "Working from home is a growing trend in the UK, however, some businesses have been slow to adapt. For anyone who thinks they would work well outside of the office environment and would like to save a little time on the side, you are well within your rights to ask your employer for the opportunity to work from home.

"At Monster, we ran a few 'what if' scenarios looking into the other positive impacts that increased working from home could bring. It turns out beyond potentially improving work-life balance, we could see less crowded trains, substantial savings and significantly reduced CO2 emissions. All very good reasons to consider a switch."