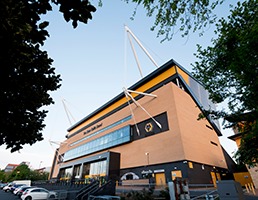 The long-term partnership begins on 1 June and will cover all match day and non-match day food and beverage offerings at Molineux, including hospitality areas and concourse kiosks.

It has "pledged to implement state-of-the-art technology across concourse areas to improve speed of service at outlets, while new digital signage and creating a cashless environment will greatly enhance the fan experience".

New food and drink retail ideas will be developed during the summer to put "consistent quality offerings at the core of match day operations, including fan favourites and an increased number of draught beer service points".

The partnership starts with Levy UK providing catering options across retail outlets and exclusive areas for one of Rod Stewart's UK tour dates on Saturday 8 June.