Menopausal women do not feel supported at work 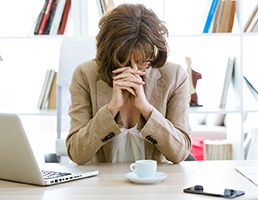 Most menopausal women say their symptoms make work "much harder" for them, according to a study.

Forth With Life, a biomarker tracking service, conducted a study of 1,000 women around the UK, all over 45 years of age and all currently in either full-time or part-time work.

The survey respondents experienced typical menopause symptoms to varying degrees. The most common issue was hot flushes, which affected 73 per cent of the sample group. The next was drowsiness or exhaustion, with which 63 per cent struggled. A further 48 per cent reported low mood, 47 per cent found it difficult to concentrate, and 43 per cent had suffered memory problems.

Only 6 per cent claimed that they didn't experience any symptoms of the menopause at all while working.

As a result of the symptoms they experienced, just over a third struggled with depression and anxiety, and 29 per cent developed low self-confidence.

Over half (58 per cent) of respondents said they were still experiencing symptoms of the menopause, and this continued to affect their work and 41 per cent admitted that those symptoms were causing them to make mistakes at work. About 40 per cent mentioned that the menopause had caused them to lose interest in their job.

The poll showed that menopause might occasionally have "a dramatic and profound effect" on a person's career. This was manifested in a lack of self-confidence; 11 per cent of women reported this, saying it had developed as a result of their symptoms, and had prevented them from putting themselves forward for promotion.

A worrying 8 per cent believed that menopause is likely to have contributed to their decision to quit their jobs.

Of those surveyed, 24 per cent said that they had taken a sick day because they were suffering from symptoms. Almost half of those who did so said they called in sick on multiple occasions.

The national average of menopausal women who have called in sick to work more than once stands at 11 per cent.

When examined by region, it is apparent that women in Yorkshire aged 45 and over took the highest number of days off work because of the menopause - 20 per cent doing so more than once. Northern Ireland saw the largest proportion of women calling in sick just once - 37 per cent claim to have done so, while the national average stands at 13 per cent.

Almost three-quarters of the women in the sample group believed that their employers should do more to support women experiencing symptoms of the menopause.

Sarah Bolt, Forth With Life founder, commented: "It's quite shocking to see the lack of support women get at work and our study highlights how urgent it is for UK employers to improve their policies and offer help that is much needed."