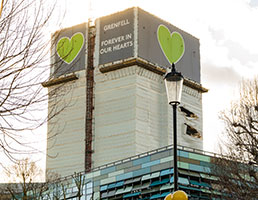 Fire safety regulations must still be changed despite the government's promise last week to fund the replacement cladding on 150 high-rise blocks in the wake of the fire at Grenfell Tower in 2017.

In a statement responding to the government's announcement, Tamlite says: "By way of an example, escape levels were based on the technical capabilities of luminaires developed in the 1970s: therefore, these regulations need to be updated and change is required across all aspects of fire safety."

The lighting company points out that it is "important that we make clear we welcome the further £200 million bill to replace Grenfell Tower-type cladding (in private high-rise blocks)" but that it was also "very concerned that the focus has been driven by the media spotlight on cladding - as such, we feel there has been insufficient attention on the need to address all aspects of fire safety including auto fire detection, emergency and escape lighting".

In conclusion, it adds that it wants to see "significant fines, penalties - and in the most extreme cases prison sentences - for landlords of high-rise and larger-scale buildings where safety standards are not met".

"We regularly see examples in the media of 'private' landlords being fined and facing prison sentences (often these individuals own/operate small apartments and buildings). All in all, more must be done to deter any organisation or individual who fails to protect the lives of those living in its building."