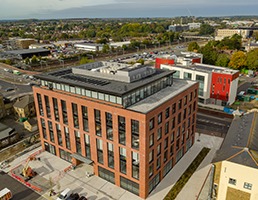 Engie sees revenue rise on back of global energy activities

Support services company Engie has been awarded a 10-year maintenance and repairs contract by Ashford Borough Council worth £25 million.

Tenants of the 5,500 homes owned by the council are promised faster response times for urgent repairs, and the out-of-hours response time reduced from a maximum of four hours to two.

Sharon Williams, head of housing at Ashford Borough Council, said the authority had previously worked with up to a dozen suppliers to deliver reactive housing repairs and maintenance for its 5,500 properties across the district.

She added: "Integrating all that work through one supplier is already bringing considerable benefits to the council, while tenants are also enjoying improvements in the service they receive."

The council's tenants will be offered more choice and flexibility in making appointments, with booking hours now extended until 8pm each Wednesday and also until 1pm on Saturdays.

Planned improvements for those in local authority housing include the ability to agree an appointment when reporting a repair, text reminders of appointments, improved online access to report new repairs and the opportunity to check the status of previously reported repairs.

Engie and Ashford have already integrated their contract management system and housing repairs system to streamline administration and reduce paperwork.

As part of the contract, Engie has committed to using a local supply chain, and is offering 40 work experience placements for young people in the area - five apprenticeship schemes lasting two years each and a further five traineeships. The apprenticeships will be arranged in conjunction with Ashford College.

The company has also proposed a waste recycling target of 95 per cent for year one, moving to 100 per cent in year two as part of its energy efficiency targets.

Simon Lacey, regional managing director for Engie, said: "The council has invested heavily to offer the best standard of living for its customers and we are thrilled to be supporting them in these efforts. We have worked closely throughout the contract negotiations to ensure this isn't just a repairs contract, but a programme that will ultimately improve lives through better, more sustainable homes, while presenting employment and training opportunities for local people."