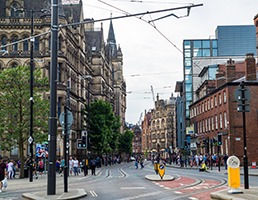 Manchester reported the highest office take-up figures in the UK for the first quarter (Q1) of 2019, according to commercial real estate services firm Avison Young's Big Nine report, with over 500,000 square feet secured, more than any other region outside of London.

During Q1, Manchester city centre deals amounted to 314,733 sq ft, while a further 193,142 sq ft were secured across the wider region.

The report also revealed that a total of 5.3 million sq ft of space is currently under construction across the nine cities, the highest figure since 2007, 40 per cent of which is in Manchester and 22 per cent is pre-let.

Take-up across the Big Nine office markets amounted to two million sq ft during Q1 2019, with the out-of-town market performing better than the city centres compared to the average.

Chris Cheap, principal at Avison Young and managing director of UK Regions, said: "Interestingly, despite the encouraging figures, this was actually Manchester's lowest quarterly total since the end of 2017. Given the current political uncertainty and in light of Q1 typically being the quietest quarter of the year, Manchester's strong figures are testament to the city's continued growth and confidence in the region.

"This quarter saw a broad spread of activity across a number of sectors including professional services, financial, TMT and utilities, with the private sector dominating the market in all cities. With a number of large requirements in the market at the moment, we expect to see take-up figures continue to rise over the rest of the year, as well as a rental growth, as the race for quality space heats up."

Another high-performing city in the report was Edinburgh, which made its strongest start to the year since 2016, with 96,129 sq ft take-up in the city centre and 110,168 sq ft out of town.

The total volume of office investment across the Big Nine cities during Q1 amounted to £244 million, which compares to the 10-year quarterly average of £543 million.