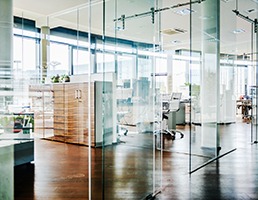 Fewer than half (43 per cent) of workers believe the current design of their workplace is encouraging innovation and creativity.

Furthermore, over a third (36 per cent) of respondents say they would be less likely to take sick days if they worked in more inspiring surroundings.

The research also found that an overwhelming 85 per cent of the respondents agree that visitors and clients typically form a judgement of a business based on the look of the workplace.

And at least two-thirds (79 per cent) believe that if they were looking for a new job, a well-designed workplace would make them more inclined to want the position.

Researchers say it is therefore evident that the design of an office is a valuable and persuasive asset when looking to both attract top talent and win potential clients.

Temperatures, lack of natural light and noise levels are the biggest workplace well-being concerns, according to British office workers.

Oktra states that "considering that a typical day in the office can range between 7-12 hours, it is undeniable that the environment in which they work needs to accommodate and support their daily requirements in order to maximise productivity and well-being. A well-designed workplace with the right lighting, acoustics and air conditioning can help resolve some of these issues affecting well-being".

Sleeping pods are the favourite emerging design feature in offices - nearly three in 10 (29 per cent) British office workers confirm that they would be likely to use a sleep pod if they were available in their workplaces.