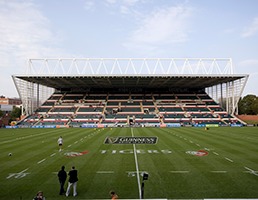 Levy UK will overhaul the match day and non-match day catering operations of Leicester Tigers' home stadium when the partnership begins on 1 June.

The food and hospitality contract will allow Levy UK to deliver their "concepts and fresh approach" to match day and C&E catering across the English rugby union team's 25,849-capacity stadium.

To support demand, additional retail outlets will pop-up around the stadium site. There will also be new menus that consider "health, well-being and the environment".

Levy UK has a reputation within the professional sporting arena, having partnered with England Rugby's Twickenham Stadium and football clubs such as Chelsea FC at Stamford Bridge, Leicester City FC at King Power Stadium, and Tottenham Hotspur FC's stadium, as well as London's The O2.