Survey calls for an end to workplace stigma surrounding menstruation 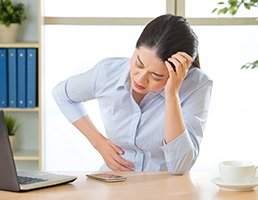 There is still a stigma connected to periods in the workplace - "from explicit comments to lack of conversation and facilities", according to research carried out by a group affiliated to the Chartered Institute of Personnel and Development.

The institute's 'Developing People Globally' blog surveyed 2,000 menstruators about their experiences including trans men and found that while the conversation has started to break down the taboo, the issue continues to affect those who have periods.

Currently, half of those who menstruate (47 per cent) say there is a definite stigma around periods in the workplace.

Six in 10 respondents to the survey say they feel unable to discuss menstruation at all with their colleagues or managers. This trend is more prominent in male-dominated workspaces, where 75 per cent of those who have had periods "completely unable to address or discuss this bodily function at work".

This lack of conversation is leading to problems for women when it comes to health. Menstruation cycles can cause a range of medical issues from cramps to endometriosis and migraines. Because of period stigma, well over half of those who suffer from these conditions (57 per cent) have had to lie to their managers about the reason for sick days.

As well as being awkward for the employee, this could have knock-on effects for their health at work. If workers felt able to speak honestly and openly about the reasons for their sick days, employers would be able to better provide support for them in the workplace.

The reasons for not disclosing period-related health problems do not entirely stem from lack of conversation. Almost a third (30 per cent) say their colleagues don't take period pain seriously. A number of survey respondents had even been told that their period pain "is not a real illness".

Negative associations with periods and a sense of somehow being unclean also affect behaviours within the workplace. For example, almost three-quarters of menstruators (74 per cent) say they feel as though they must hide any sanitary products at work.

The researchers call for more open conversation about periods to tackle stigma and training staff.

London (Greater)
Up to £47,276 per annum plus excellent benefits
Reference
59097
END_OF_DOCUMENT_TOKEN_TO_BE_REPLACED