Relationships among co-workers determine 'well-being' the most 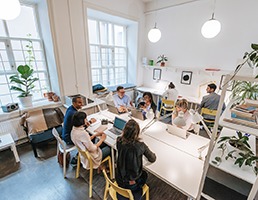 People's relationships with co-workers are the main factor in determining their well-being at work, according to a report by The Myers-Briggs Company.

A study of more than 10,000 people from 131 countries compared workplace well-being across geographies, occupations, genders, personality types and age.

It was carried out by Dr Martin Boult, senior director of professional services and international training at The Myers-Briggs Company, the global leader in personality, career, and professional development assessments.

Having supportive, meaningful relationships is an essential element for people's workplace well-being that organisations need to foster and individual employees can nurture. In comparison with the other well-being factors, 'positive emotions' was the lowest rated aspect of well-being.

While 'positive emotions' was found to be lower than other aspects of well-being at work, the overall low ratings for the 'negative emotion' factor do not suggest that most people are frequently experiencing negative emotions at work. Rather, they imply that optimism, contentment, happiness and satisfaction are experienced less often than other aspects of well-being such as meaning or accomplishment. Given the widely accepted effect of positive emotions on motivation, discretionary effort, creativity and ultimately engagement in the workplace, this presents a significant area for improvement in workplaces around the world, says the report.

Over the three years it was carried out, the study consistently found men and women have very similar levels of overall well-being at work. Men appear to experience positive emotions slightly less frequently than women, which also coincides with their somewhat lower levels of engagement, meaning and accomplishment when compared with women.