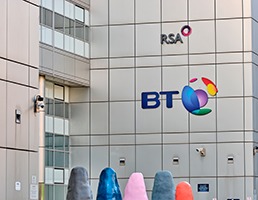 The BT Group has announced the first eight of the locations that will house its workplaces of the future.

Belfast, Birmingham, Bristol, Cardiff, Edinburgh, Ipswich (Adastral Park), London and Manchester are the first towns and cities to be selected and each will house a variety of the company's operations.

This is the first step of a three-to-five-year programme first unveiled in May 2018 to improve and consolidate BT's workplaces across the UK.

'The Better Workplace Programme' will "consolidate BT Group's footprint of more than 300 locations to around 30, containing modern, future-fit buildings, including corporate offices, contact centres and specialist sites" and BT states that it is the largest programme of its type in the UK.

BT's telephone exchanges will be retained by the group.

Detailed plans of BT's footprint in each location are still to be finalised, but some of its existing buildings will be refurbished while in others BT will move to new offices.

BT Group is responsible for generating £1 in every £75 produced across the UK, according to an independent report. It also generated £22.8 billion to the nation's economy in gross value added during the 2017/18 financial year.

Earlier his week, BT Group revealed it would also be leaving its St Paul's headquarters in London and is currently identifying a new home for the business in the capital. More details on 'The Better Workplace Programme' will be revealed in due course.

London (Greater)
Up to £47,276 per annum plus excellent benefits
Reference
59097
END_OF_DOCUMENT_TOKEN_TO_BE_REPLACED