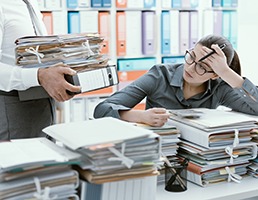 Although 64 per cent of Brits are working more hours than they're contracted to, more than half (55.1 per cent) struggle to make ends meet at the end of each month, according to research by jobs website CV-Library.

In addition to this, 11.3 per cent work more than 15 hours extra each week, totalling £12,045.60 in unpaid overtime. The 'long hours' culture in the UK is therefore not only having a significant impact on the energy and productivity of British workers, but it is costing them significantly, conclude the researchers.

UK employers are failing to pick up on their efforts. Nearly three-quarters (74.9 per cent) of the UK's professionals believe they are underpaid.

As well as the negative effect that this will have on employee morale, staff also suffer the financial consequences of being underpaid. Consequently, (50.6 per cent) of Brits are left thinking that their colleagues at a similar level earn more.

The survey also found that a large percentage of Brits have difficulty managing their finances each month.