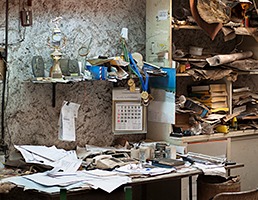 Only 14 per cent of workers decide when to wash their hands after going to the bathroom, according to a survey into workplace cleanliness.

SMC Premier Cleaning surveyed more than 5,000 UK office workers and found that only 7 per cent admitted to not washing their hands at all and 18 per cent said they washed their hands quickly.

Busy working days can result in office workers not taking a proper lunch break and 26 per cent of respondents say they eat at their desk between once and three times a week.

A quarter of office workers will eat while working 3-5 days and 4 per cent eat lunch at their desk every day. Surprisingly only 11 per cent will clean their workspace properly after eating and 38 per cent will do a 'quick clean', putting wrappers in the bin.

Almost half - 45 per cent - claim never to spill a crumb on their desk, leaving 7 per cent who are too lazy to care and refuse to clean up after themselves.

Hot-desking has grown in popularity over the years, but 44 per cent of those surveyed had never considered the possibility that hot-desking could be germ-ridden and are happy to sit wherever.

Only 12 per cent of hot-deskers are fussy about where they work and will only sit at a desk if they know it has been cleaned first. Only 38 per cent believe hot-desking to be unhygienic.