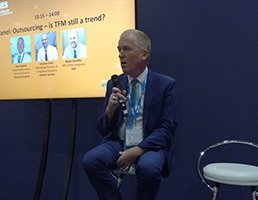 A key debate this week's Facilities Show at ExCeL London saw the spotlight turned on a prevailing hot topic in FM - the future of outsourcing.

Four months ago, MAG brought the cleaning function at Stansted Airport in-house because  "we wanted the ability to influence directly the staff that provide that service for us rather than ask our FM provider and go through the whole management part of that chain", said Roy Elphick, asset maintenance and services director at Stansted Airport.

Owing to the timing of flights and unusual peak and off-peak hours at the airport, cleaning can only happen during particular periods so having responsive cleaners was essential. Twenty-eight million passengers passed through Stansted Airport last year, making cleanliness an essential hygiene factor.

"Cleanliness became part of our core business, so by definition it makes sense to insource," said Elphick.

The decision to insource, still only recent, has cost MAG more money, but Elphick said it has been easier to make the staff feel part of the team, noting how wearing the same uniforms and badges helps to shape a collective identity.

Despite this shared information, Elphick, who was at the Facilities Show as a panellist on a discussion titled 'Outsourcing - is TFM still a trend?', answered that TFM is still a trend, but it comes with a caveat: it depends on the client. Elphick outsources specialised services such as maintenance of lifts and escalators as well as certain hard services such as water treatment and fire protection systems maintenance. But he also has a team of in-house engineers to maintain daily operations.

Fellow panellist Mark Sutcliffe, managing director of the Integrator at KBR, agreed with Elphick that TFM was a trend but other popular themes have also emerged such as considering bundled FM services and increasing focus on social value.

Graham Peel, managing director of integrated solutions at Atalian Servest, said that from the vantage point of a service provider, TFM was very much a trend. Peel was meant to be a panellist but owing to "unforeseen circumstances" he had to fill the gap left by scheduled host Nigel Lucker of the Foreign and Commonwealth Office.

When it comes to deciding whether or not to outsource services, Peel said that there were two main challenges customers might face: choosing the right FM partner and, attached to that, trust.

But Elphick responded: "Trust might be a bit of a strong word. I think be very clear on what you're actually asking for and making sure that as you go through that process that everyone is clear about what is to be delivered as part of that outsourced product. That, to my mind, is where the 'trust' word comes in."

Sutcliffe said: "Trust is very important. Also, the market is changing from our perspective away from the KPI model ... to a trend towards outcome-based, which is about trust as well so the client must trust the provider to get on with it and not use the stick all the time and actually using the outcome-based is much better than a KPI-based mechanism."

Regardless of which services are outsourced, the panellists agreed that a partnership of mutual respect between client and provider is key, along with a culture of collaboration, which Sutcliffe defined as "how you fall out and get back together again - because you will fall out".

Elphick acknowledged that a potential pitfall of insourcing is a lack of access to innovation that service providers can bring. However, he expressed his surprise at the lack of innovative solutions displayed at the Facilities Show, noting that there wasn't a single robotic cleaner on the floor.

Innovation, Sutcliffe said, is a tricky metric to put into a contract; how is it measured? What does it mean? Innovation isn't just about bringing in IoT solutions, for instance, but rather finding new and improved ways to reduce risk, enhance customer focus and boost health and safety.