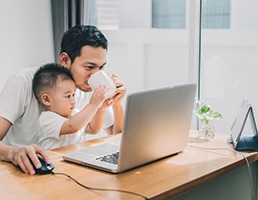 Modern-day fathers are more involved in parenting than ever before and need more flexible working arrangements, according to research by website Daddilife.com.

Its survey found that 87 per cent of the dads are either mostly or fully involved in day-to-day parenting duties.

Men are increasingly putting fatherhood ahead of careers or at least accepting the need for a better balance between work and home life after the birth of a child.

The study found that nearly two-thirds (63 per cent) of men had requested a change in their working pattern since becoming fathers.

That might mean asking to spend a day or two working from home every week - maybe because they can be present for the nursery run - or for half-an-hour of play and interaction at lunchtimes.

They have also asked for compressed or reduced hours so that they can spend more time with their children during the crucial early years of a child's development.

Millennial fathers are prepared to take "drastic action" to make sure they achieve a lifestyle that is good for work and good for their families.

The study found that a third of men had already changed jobs since becoming a father - and a further third were actively looking to change jobs.

Daddilife.com surveyed at least 2,000 working fathers across every area of the UK, in every industry classification, to gain a clear direction about what this means about the future of work for 'millennial dads'.