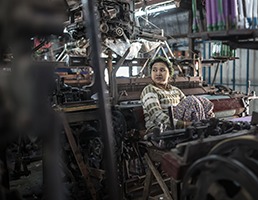 Modern slavery, fairness, inclusion and respect (FIR), plus community engagement have emerged as standout areas of achievement and improvement for FM over the past year, suggests an annual industry-wide survey.

The study of built environment contracting organisations and supply chain companies was undertaken by the Supply Chain Sustainability School.

The findings of its second impact survey reveal that the leadership, learning and support the school provides are clearly and consistently credited with making a significant positive influence.

In the survey, nearly nine out of every 10 companies achieving an improved understanding of modern slavery (86 per cent) and fairness, inclusion and respect (87 per cent) state that the school has helped them to achieve these results.

The proportion that attributed their increased levels of community engagement to the assistance received from the school also rose year-on-year by some 15 per cent to 72 per cent in total.

The findings illustrate direct and specific benefits to be gained from the free learning resources provided by the school.

Alison Bettany, strategic supply chain manager at Emcor UK, said: "It is encouraging to see the positive results from the impact survey, which confirm the business benefits of joining the Supply Chain Sustainability School. Within the FM sector, the highest impact has been in the understanding of modern slavery, where improvement highlights the benefits of the workshops, events and e-learning modules which have been developed."

The school has 86 partners now supporting the shared mission of world-class collaboration to enable a sustainable built environment.

The survey deliberately tackled some topics where responses confirmed that the built environment sector remains slow or perhaps reluctant to address responsibilities and seize opportunities.

Although the number of respondents reducing carbon emissions fell slightly to just 34 per cent, the proportion indicating that the school had helped them rose by 10 per cent.

Similarly, although only 20 per cent had improved on air quality, that figure was up 5 per cent on 2018, with the percentage crediting the school for assisting them jumping some 15 per cent to 70 per cent, in total.