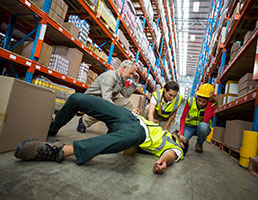 The number of workplace fatalities last year increased slightly, according to the Health and Safety Executive (HSE).

Provisional annual data for work-related fatal injuries shows that 147 workers were fatally injured between April 2018 and March 2019. This is an increase of six workplace fatalities from 2017/18, however, the number has remained broadly level in recent years, said the HSE.

The number of fatal injuries to workers in construction - 30 - was the lowest number on record. However, the rate of fatal injuries (fatalities per 100,000 workers) was almost three times the average for all sectors.

This is still lower than in agriculture, forestry and fishing, and the waste and recycling sector, which have a rate of fatal injury 18 and 17 times higher than the average respectively.

The figures also showed that 25 per cent of fatal injuries during the year were to workers aged 60 or over, even though they made up only around 10 per cent of the workforce.

Mesothelioma, which is contracted through past exposure to asbestos, killed 2,523 in the UK in 2017, a broadly similar number to the previous five years. The figures are largely because of occupational asbestos exposure before 1980, and annual deaths are expected to remain similar for some years to come.

HSE chair Martin Temple said: "Today's release of workplace fatality statistics is a reminder that despite the UK's world-leading position in health and safety, we cannot become complacent as we seek to fulfil our mission in preventing injury, ill health and death at work."