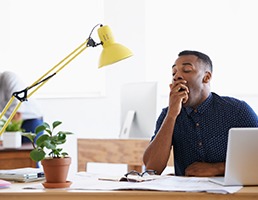 Employers are missing out because many workplace environments fail to cater for the different times of the day people are most productive, shows research.

Extentia's research concluded that productivity could be boosted by simple changes to workplace environments including boosting natural light and airflow, making sure amenities and refreshments are available out of hours, and more homely design features.

It found that 45 per cent of all respondents said they worked after hours, meaning that people are working past their most productive time.

Of the 76 per cent of 'morning people' who went to work early, more than half (59 per cent) were frustrated by an inhospitable working environment. Common complaints included workplaces being cold (17 per cent), depressing (12 per cent) and eerie (10 per cent) and lacking in quiet spaces (20 per cent).

Extentia warns that UK employers could be losing out on employee productivity because of poor workplace environments that fail to cater to 'larks' who are most productive first thing in the morning and those who thrive in the evening, respectively.

Tony Lenehan, chief executive at Extentia Group, said: "Our study has shown that the UK is a nation of larks who feel more productive and alert and have their best ideas first thing in the morning. Accommodating these workers through better workplace design and better furnishing could help UK employers boost productivity.

"It's not about encouraging employees to spend more time at work, rather getting employers to understand that workplace design has a direct impact on productivity, and by adapting their environments they can ensure they're playing to the strengths of their employees."